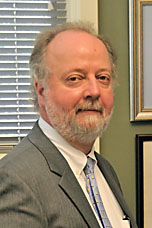 A founding shareholder and the President of Marshall, Roth & Gregory, PC., Clifford “Kip" Marshall has practiced law for more than 30 years in Asheville and the western region of North Carolina. He is admitted before all the courts of the State of North Carolina, the Cherokee Supreme Court, Eastern Band of Cherokee, the U.S. District Court for the Western, Middle and Eastern Districts of North Carolina and the United States Court of Appeals for the Fourth Circuit.

From 1982 to 2001, Mr. Marshall was an Assistant United States Attorney for the Western District of North Carolina, serving as the Civil Chief for the District fourteen of those years. As Civil Chief, he was the supervisory civil trial attorney for more than 100 federal agencies and sub-agencies. His litigation responsibilities included serving as the United States trial lawyer in medical malpractice cases, Qui Tam (“whistleblower”) actions, employment discrimination, personal injury, federal contract and commercial claims, real property title/boundary disputes, civil forfeitures, and financial fraud.

Recently, he has secured for his clients seven figure whistleblower awards in the federal mortgage banking litigation; the return of properties valued in the six figures which had been wrongfully forfeited by the United States government; and catastrophic injury awards in excess of six figures. Together with Philip J. Roth of the firm, he was successful in obtaining the largest housing discrimination verdict in North Carolina history.

He is a certified North Carolina Superior Court mediator and has been called to mediate matters arising in the North Carolina courts and federal district courts.

Mr. Marshall continues to be recognized with distinction by his legal peers. He holds an AV Preeminent rating from Martindale-Hubbell® Peer Review Ratings.™ In 2021, he is again named as a Best Lawyer®, an honor he has earned consecutively for ten years. In addition, he has been recognized and quoted by the Charlotte Observer, The Wall Street Journal, The New York Times and The Washington Post regarding his most recent Qui Tam and whistle-blower successes.